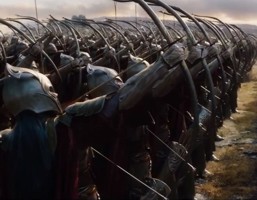 Surrounded by two armies. Tens of thousands of soldiers in front and to the rear. Total annihilation was a real possibility. Before nightfall your comrades could be strewn across the battlefield. This sounds like a scenario from the Lord of the Rings movies.

But this story is true.

“When Joab saw that the battle was set against him both in front and in the rear, he chose some of the best men of Israel and arrayed them against the Syrians. The rest of his men he put in the charge of Abishai his brother, and he arrayed them against the Ammonites. And he said, ‘If the Syrians are too strong for me, then you shall help me, but if the Ammonites are too strong for you, then I will come and help you.'” (2 Samuel 10:9-11)

Well, it still sounds scary, but at least it sounds like a workable plan. Joab, the general in charge, knew he couldn’t just sit and twiddle his thumbs. He needed a plan, a course of action. He needed to be able to look his army in the eyes and tell them what he intended to do. So he offered his very best, well-reasoned strategy. But he didn’t stop there.

Joab also encouraged the army. “Be of good courage, and let us be courageous for our people, and for the cities of our God…” (vs. 12a) Beyond laying out the strategy, he bolstered his people with words of encouragement. This reminds me of what God said over and over to Joshua as the people of Israel were on the verge of the Promised Land: “Be strong and courageous.” Don’t go into the battle with a we’re-goners mentality. No! Be courageous. So Joab encouraged his army.

But it’s what Joab said at the end that really strikes me. “And may the Lord do what seems good to him.” (vs. 12b)

Ultimately, Joab recognized that the Lord’s people were in the Lord’s hands. He chose to trust God. In essence, Joab is saying that regardless of the outcome, we will trust that God is in control.

Is there something happening in your life for which you should follow Joab’s lead?

This entry was posted in Scriptural Perspective and tagged 2 Samuel 10, facing trials. Bookmark the permalink.