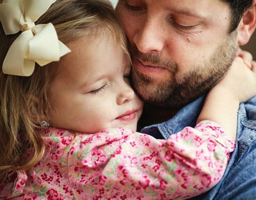 She had wandered away. It wasn’t intentional. There were just so very many things to look at. She was only four years old, after all. For a little girl who lived in the country on a farm, the three story shopping mall – and all of its glitz and glitter, colors and movement, and people … so many people – it was all so overwhelming. She had never encountered anything like it.

There were live “mannequins” in a store window, moving only every few minutes. Food vendors with every imaginable type of delicacy – even the smells enticed her. There was a woman dressed as a clown making and handing out balloon animals. The larger-than-life carousel in the middle of the mall. And so much more.

Elise’s head turned this way and that, trying to take it all in. But she couldn’t. There was no way someone her age could process all that activity that was happening at the same time. Her brain was on overload.

Just as she felt she was being smothered by all the sensory options, she noticed that her father wasn’t next to her. He had just been there, and now … he wasn’t.

Panicked, she turned around, but he was nowhere to be seen. She looked this way and that way … spinning … now running, and stopping again … running a different direction … frantically searching. But she still didn’t see Daddy.

Gasping for breath in the midst of the throng of people – who were all so much bigger than her – Elise’s fears engulfed her. He’s gone! I’m lost! “Daddy!” she shrieked. Then Elise crumpled to the floor and sobbed.

She was only there a moment when she felt the strong arms. Elise lifted her head and saw Daddy picking her up and holding her tightly to his chest, hugging her, loving her, telling her that everything was okay.

The word “compassion” in this verse is the Hebrew word, racham. It’s what Elise experienced at the end of the story. It’s the loving, comforting embrace of a father who cares deeply and fully for his child.

This entry was posted in Scriptural Perspective and tagged comfort, loving embrace, Psalm 103:13-14. Bookmark the permalink.