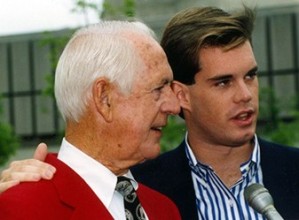 Renowned sports broadcaster Joe Buck is heard nationally on broadcasts of major football and baseball games. Joe is the son of Hall of Fame broadcaster Jack Buck. Jack was the radio voice of the St. Louis Cardinals for decades. One day when Joe was in his late teens, he was in the Cardinal’s broadcast booth with his dad. Joe was not yet a broadcaster; he was just there as a son with his father. At the end of one inning, though, Jack stood up and told Joe the next inning was his. Jack then turned and walked out of the booth. Joe just sat there with his mouth hanging open. Though he had long dreamed of following in his father’s footsteps, he wasn’t sure he was ready. But by the time the inning began, Joe was ready to go and did a good job. Talk about a baptism by fire!

You know, there are times when God does that to us. He thrusts us into situations for which we are sure we’re not prepared, yet just like Jack knew Joe was ready—he had often heard his son doing play-by-play to himself as he sat watching a sporting event—the Lord knows when we’re ready. In fact, God knows far better than we do.

The truth, though, is that the Lord offers us a far better situation than Jack did with Joe. God doesn’t leave us on our own. He doesn’t walk out of the broadcast booth—or whatever the situation might be—and leave us sitting there alone. No, He walks with us through each and every situation. He has promised never to leave us (Hebrews 12:5).

(Excerpted from Worshiping God in the Hard Times, by Tom Kraeuter, ©2009 Training Resources, Inc., Hillsboro, Missouri. Get your copy at http://training-resources.org/worshiping_god_in_the_hard_times.html)

This entry was posted in Scriptural Perspective and tagged God is with you, Hebrews 12:5, Jack Buck, Joe Buck. Bookmark the permalink.