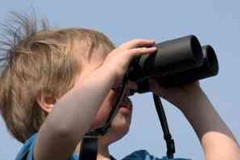 Awhile back, I watched a documentary video about communist oppression in Eastern Europe during the 1960s. Some people hid for years in the forests. Underground dens, camouflaged huts, elaborate warning systems, and many other ideas kept them hidden from their adversaries. Soldiers sometimes marched right next to or over the hiding places and never saw them.

Contrast that type of hiding with a very different notion of hiding. When my kids were younger, we sometimes played hide and seek. When I hid, it was always with the intent of them finding me. Toes sticking out from beneath drapes, closet doors left ajar, fingers in plain sight on door frames, were all done intentionally to allow them to find me.

When Scripture tells us to “seek the Lord”—in Jeremiah 29 and many other places—it’s not because He is hiding like those people in Eastern Europe. He’s not trying to make sure we can’t find Him. Instead, it’s more like me with my kids. He wants us to find Him. He desires for us to know Him.

Of course, God isn’t actually hidden. “For what can be known about God is plain … For his invisible attributes, namely, his eternal power and divine nature, have been clearly perceived, ever since the creation of the world, in the things that have been made” (Romans 1:19).

Someone once said that God is hiding … in plain sight.

So seek Him. Read and study His Word. Pray. Meditate on His greatness, His goodness, His faithfulness, His compassion, His holiness, His mercy, and His love. Seek Him.

This entry was posted in Scriptural Perspective and tagged Jeremiah 29:13-14, Romans 1:19, seeking God, seeking the Lord. Bookmark the permalink.

2 Responses to Seeking the Lord