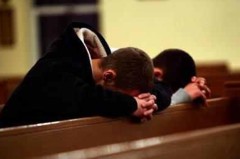 The Greek word that we translate as “casting” is epirrhipto. Epi means “upon;” rhipto means “cast.” To cast upon. That’s what we’re to do with our anxieties, our worries. We cast them on Jesus.

It was only recently that I realized there is apparently just one other place in the New Testament where this word is used. I have to wonder how many people know where that is. If someone had asked me that question a few weeks ago, I would have guessed it had something to do with Jesus’ disciples casting nets. That’s really the right idea for the word, but the wrong reference.

Actually, the word is used in Luke 19:35. “And they brought it [the donkey colt] to Jesus, and throwing their cloaks on the colt, they set Jesus on it.”

Epirrhipto is what they did with their cloaks. They threw them on the donkey. They cast them over the back of the colt.

That’s what we’re to do with our worries. We cast them on the Lord. We toss them to Jesus.

Please note that once those people tossed their cloaks onto the donkey, they were no longer holding onto those cloaks. That’s a really good picture of how we should handle our worries. Toss them to Jesus and don’t hang on to them.

1 Response to Tossing Things to Jesus